Sadly, what Putin is doing in Ukraine is nothing compared to what he and our other leaders are doing to our planet.

The egregious situation that has been inflicted on the people of Ukraine by the kleptocratic egotist Vladimir Putin has provided yet another opportunity for humanity to change course. The man is funded by fossil fuel giant Gazprom, who provide 36% of his budget, and the world clearly needs to end its dependence on petro state authoritarians, including  Saudi Arabia, who are waging a war against Yemen with U.S. oil dollars and western weapons. Unfortunately, in reaction to the Ukraine situation, fossil fuel companies plan to expand production elsewhere to take up the slack from Gazprom when we all know that the answer is a rapid transition to renewables.

The latest IPCC report lays out what failure to achieve this rapid transition will inflict on our children’s’ futures. It is the final report that will be published while we still have time to act. These are just some of the take-aways from the report: 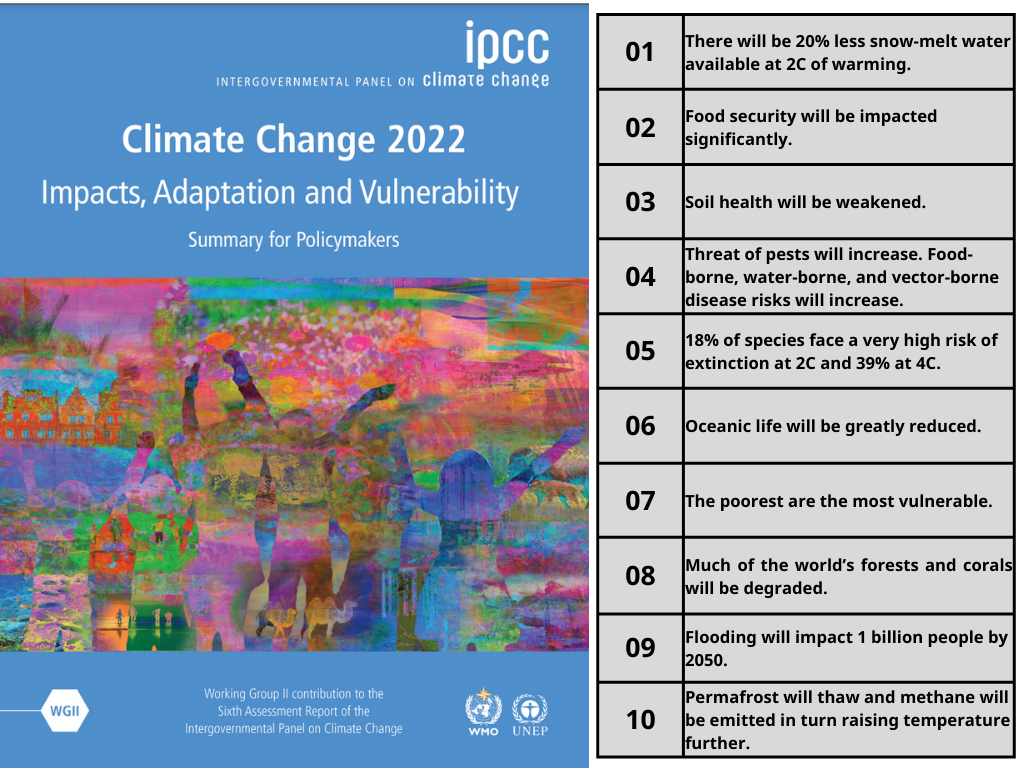 We have already been given a glimpse of the future with a global pandemic, caused by our indifference to the natural world, that continues to sweep the planet, and now could a war be giving us another warning sign. Sadly, what Putin is doing in Ukraine is nothing compared to what he and our other leaders are doing to our planet. U.N. Secretary General Antonio Guterres described it as an “atlas of human suffering” and states,

“The facts are undeniable. This abdication of leadership is criminal. The world’s biggest polluters are guilty of arson of our only home.”

If we are concerned about the situation in Ukraine when both nations have access to largely affordable food and water, what is going to happen when water becomes scarce and food prices soar? We can answer this question by looking at our recent past.

In 2014, the Secretary of Defence, Chuck Hagel, stated:

“Climate change is a “threat multiplier”…because it has the potential to exacerbate many of the challenges we already confront today—from infectious disease to armed insurgencies—and to produce new challenges in the future.”

He went on to stress the loss of glaciers will strain water supplies, hurricanes will increase instability and drought and crop failure will create mass migration. In addition, 3,100 square km of coastline in the Caribbean Sea will be lost by 2064. It seems the government in America is well aware of how climate change will impact national security, even as they increase domestic fossil fuel production.

The Ukraine situation could come to all our borders if we allow corporations to continue fueling our “democracies” on a diet of fossil fuels and animal flesh.

Seventeen retired military officers also wrote a letter to then Secretary of State Rex Tillerson advising them to remain committed to combating climate change, in part because 128 U.S. military bases would be threatened by 91cm of sea level rise. These bases are worth $100 billion. They wrote:

It is not only the American military that believe climate change to be a threat to national security; the Secretary-General of the United Nations Antonio Guterres warned that military strategists around the world view climate change as a threat to global peace and security.

There is evidence that the warming climate has already helped to cause conflict. The civil war in Syria followed a large drought in the Fertile Crescent in Syria, Iraq and Turkey. Livestock died, food prices rose and children were sickened, leading to 1.5 million rural residents moving to the suburbs of the already full Syrian cities. This happened at the same time that many refugees started to arrive after the Iraq war. Scientists stated it was unlikely that the weather conditions experienced would have existed without the warming climate. These conditions exacerbated the problem of high unemployment and poor governence which led to the civil unrest.

Further back, in 2007 the U.N. declared that the conflict in Darfur was the opening salvo in climate induced wars. The original cause of the conflict, which began in 2003, was thought to be a regional rebellion, but the UN Environment Programme (UNEP) study suggests the true source was failing rains and creeping desertification. Environmental degradation and the changing climate led to tensions between farmers and herders over decreasing land as the Sahara encroached more than a mile each year. Rainfall was also down by 30% over forty years, and these factors combined to reignite the war between North and South Sudan. Crop yields in the Sahel are expected to drop by as much as 70%. As the desert moves south, rainfall diminishes and crops fail, it’s difficult to imagine these shocks will not lead to major disturbances in Sudan and across Africa in the coming years. In fact, research in Nature finds there will be a 54% increase in the possibility of civil war in Africa by 2030. For the sceptics out there who do not believe a changing climate will drive wars, research from the past fifty years has found a link between the fall of Rome and rising temperatures, or an alteration in rainfall. Research in Nature even contends there is an observed connection between climate change and violent conflict over the past 12,000 years. This takes in all of human history since the agricultural revolution.

Unless, we all undergo a massive revolution in consciousness and start to show love to our evolutionary brothers and sisters, conflict looks more likely, not less. And, in fact, the research in Nature found that a temperature increase of around 3°C (5.4°F) in any month increased the chance of violent conflict by 14%.

Climate wars will not be limited to Africa or the destinations African climate refugees are able to escape to. Central Asia, South Asia and Central and South America will likely play host to outbreaks of climate prompted violence. This will likely lead to mass migration on a scale never before witnessed which in turn will lead to xenophobia and increased conflict.

Water will likely become the blue gold of the future. With supplies dwindling fast and demand set to outstrip supply by 2030, the possibility of water wars will increase over the coming decade. In 2011, the United States Senate, Committee on Foreign Relations issued a report called ‘Avoiding Water Wars’. In the report they express concern for the Central Asian region, including Afghanistan, Pakistan, Tajikistan, Kazakhstan, Kyrgyzstan, and Turkmenistan, and also India. They see the ability of governments to provide water to its citizens as essential for maintaining political, economic and social stability.

In 2012, Chris Arsenault predicted the next water war would be between North and South Yemen. Whilst the players might be different, the civil war which began in Yemen in 2014 is believed in part to have been caused by water scarcity. This water scarcity has been exacerbated by climate change as well as water mismanagement.

The Middle East is especially at risk due to its lack of water and extreme heat. In fact eighteen out of thirty nations projected to face water scarcity by 2025 are in the Middle-East and North Africa. Water wars are not unknown in the region with at least two wars in modern history being attributed to water. In his book, Water Wars: Coming Conflicts in the Middle East, Adel Darwish writes that grazing rights on the River Senegal led to a war between Senegal and Mauritiania in 1989. He adds that Syria and Iraq have fought small skirmishes over the Euphrates River. In his boldest claim, the writer says that he heard the former Israeli Prime Minister, Ariel Sharon, saying on record, that the 1967 war against the Arabs was over water.

Many of the world’s major rivers pass through multiple countries on their way to the sea. With diminishing supplies, countries upstream may choose to divert water to areas inland leaving countries downstream with limited supplies. Situations like this could increase tensions, especially in areas suffering from lack of food and water.

With more than 780 million people already suffering through a lack of clean water to drink, the climate crisis we are witnessing is going to increase this number exponentially. By 2030, the UN predicts that almost half (47%) of the world’s population will suffer from water stress. When people have no water, the first thing they will do is go looking for some. This is a survival instinct we all share. It is likely that wars of the future will be fought over blue gold and not the black gold fought over today. 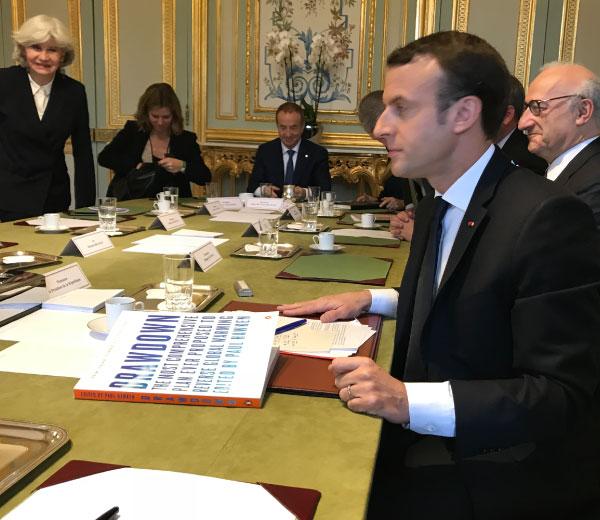 It should be abundantly clear that the likelihood of war will increase exponentially due to climate change. We still have time to act but that window is fast closing. The latest climate science states that should emissions be halted then within five years, warming will peak. We know what we need to do. It is all included in the book Project Drawdown. We know our leaders have this information. We’ve seen them with it. Unfortunately, they are compromised by the corporate megamachine than demands eternal growth when sanity is crying out for the opposite. Therefore, it is down to us to demand action.

At the height of the cold war, Sting famously sang that he hopes the Russians love their children too. The Ukrainians are proving their love today by standing up to the might of the Russian military. The Ukraine situation could come to all our borders if we allow corporations to continue fueling our “democracies” on a diet of fossil fuels and animal flesh. Isn’t it time we proved our love for our children by standing up to our corrupted leaders and their corporate backers who imperil us all with their outsized egos and greed? Activists like Extinction Rebellion have set out a rational path, and the quicker we realise we have no better hope, the more our children will love us in return.